For many, the daily commute to work is an unavoidable reality. Remote work is certainly on the rise but the majority of working Americans still take some form of transportation to their workplace each day. Regardless of whether you’re using a car, a train, or otherwise, you’re spending a significant amount of time in transit if you have a commute.

At Sky Blue Credit our goal is to help our customers improve their credit with professional credit repair services. For many people, the first step in the credit repair process is an honest evaluation of their personal finance habits. How much time do you spend traveling to and from work? Have you ever thought about the true cost of your commute?

We looked at how the length and opportunity cost of each state’s average drive to work varies across the country. It turns out that not all commutes are created equal — people in some states have a much longer trek than others. See how your commute compares.

We have also shared our four favorite ideas on the amazing opportunities commuting time offers, distilled from 30 years of discussions with customers; ideas that just might propel you to ever higher levels of income and personal satisfaction.

The Time Cost of 1 Year of Commuting in Every State 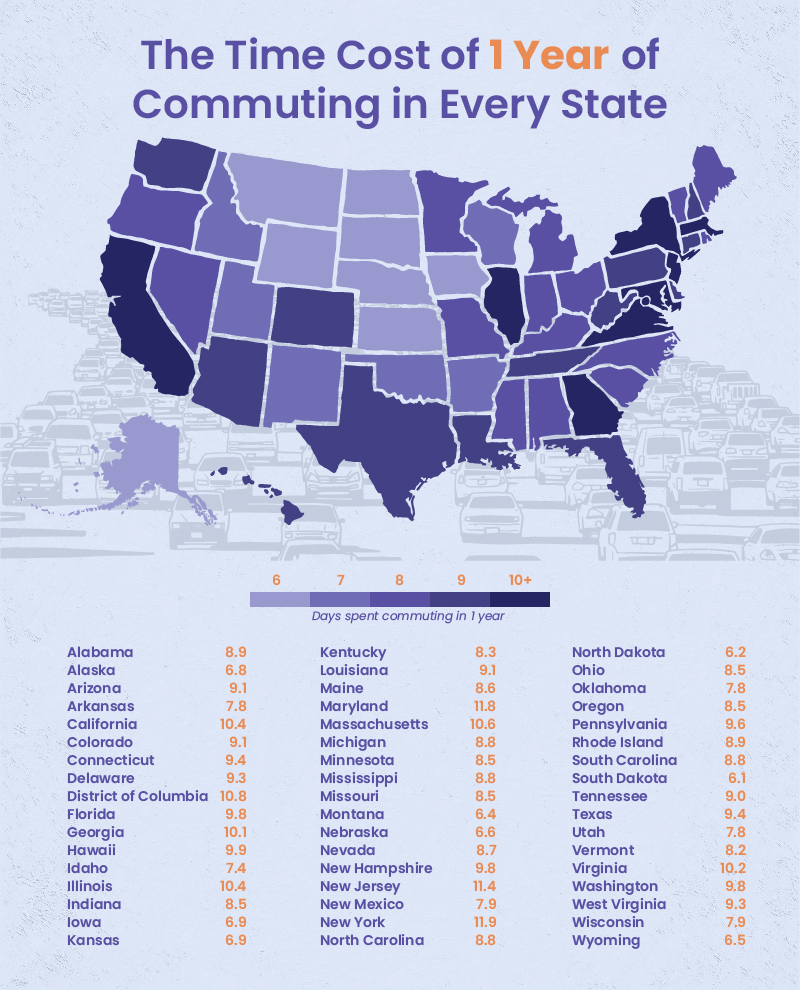 First, we looked at the time cost of one year’s worth of commuting for each state. It turns out that the average person in all 50 states and Washington, DC spends at least 6 days in transit to work over a year. The three states with the longest time spent are New York (11.9 days), Maryland (11.8), and New Jersey (11.4), while those with the shortest are South Dakota (6.1 days), North Dakota (6.2), and Montana (6.4). As one can tell from the map above, there are apparent regional trends in our results. Generally people in the Midwest spend less time making their way to work.

The Opportunity Cost of 1 Year of Commuting in Every State 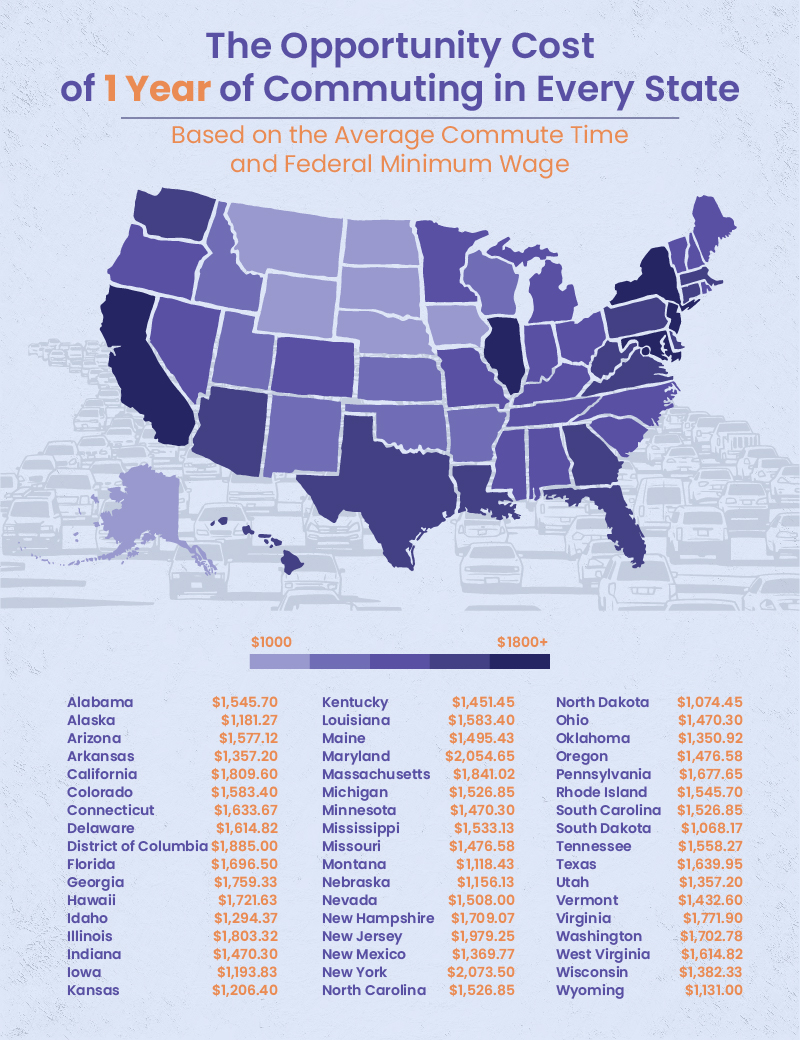 Next, we looked at the opportunity cost of each state’s commute by figuring out how much money could be theoretically earned during this time. For this we used the federal minimum wage ($7.25). Even the average person in the states with the shortest distance to work could earn over $1,000 per year if they work instead of commuting. South Dakota ($1,068), North Dakota ($1,074), and Montana ($1,118) rank as having the lowest opportunity cost, though residents could still make a considerable amount of money with this time. The states with the highest are again New York ($2,074), Maryland ($2,055), and New Jersey ($1,979).

The Cost of 1 Year of Commuting in Every State 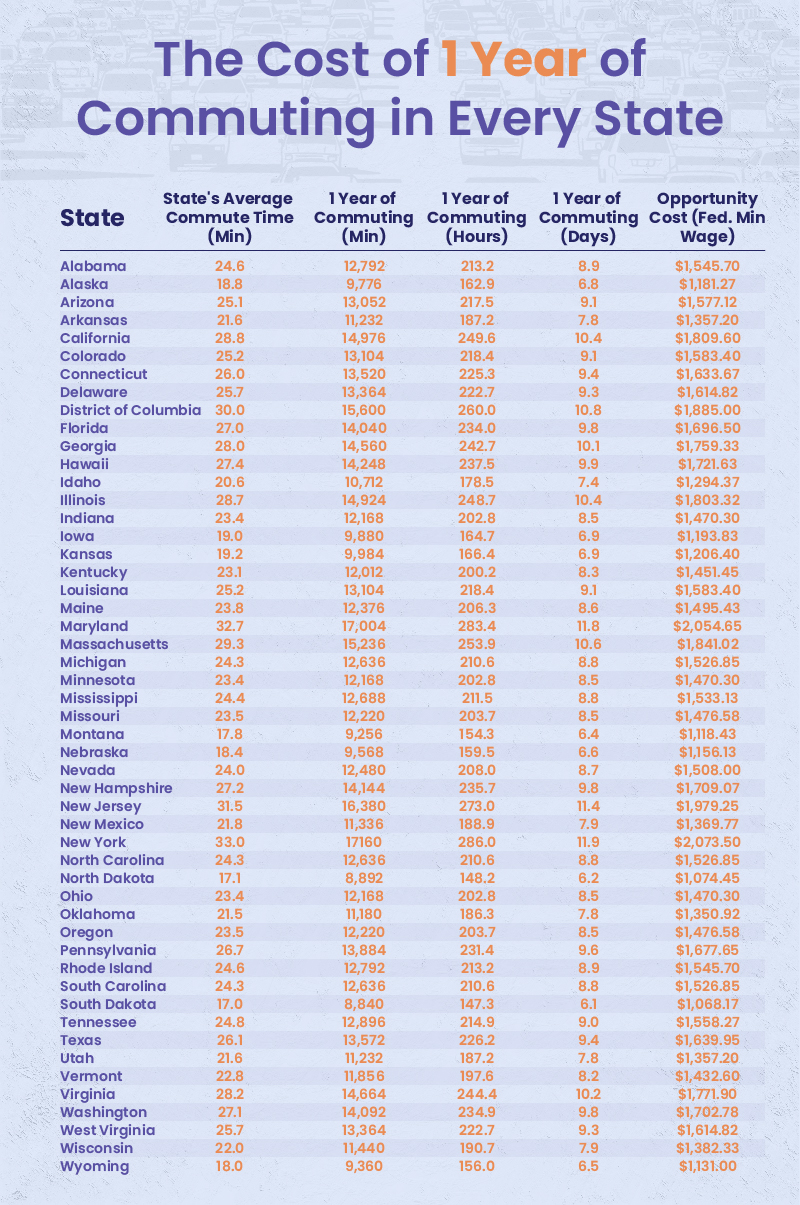 We also wanted to show more detail into our analysis. From this it is apparent how a few extra minutes on a daily commute can add up to hours. Idaho’s average one-way commute is less than 4 minutes longer than South Dakota’s (20.6 and 17.0 minutes, respectively), yet over a year’s time this adds up to an extra 1.3 days worth of time in the car or train.

The Cost of 10 Years of Commuting in Every State 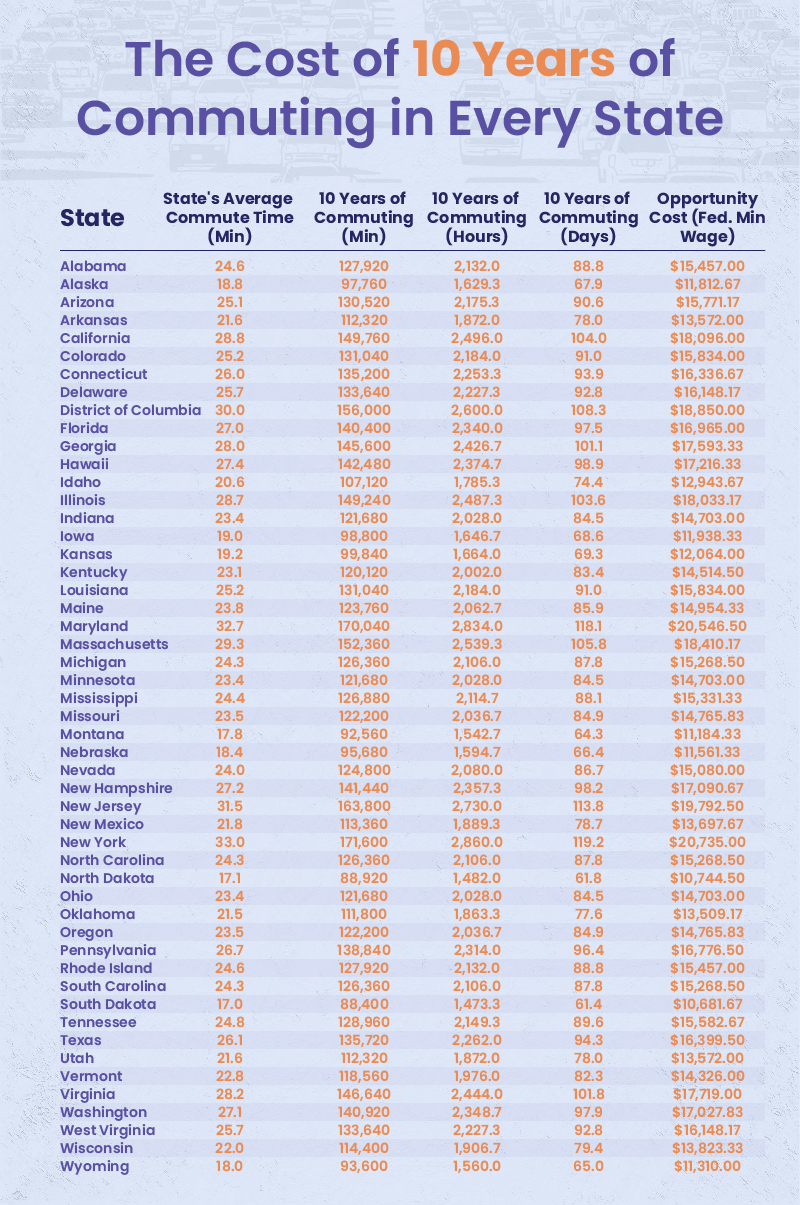 We also wanted to show what these figures look like over a 10 year span. Over this period, people will spend at least 2 months of their life traveling to work, which is worth over $10,000 when you apply what could be earned with the federal minimum wage. The average New Yorker will spend nearly double this amount of time over a 10 year period — a full 119.2 days commuting.

Commuting time offers very real opportunities. Here are our top four favorite tips for making the most of the time you spend in transit.

We used data from the U.S. Census Bureau’s 2017 American Community Survey to find the average daily travel time to work for each U.S. state and the District of Columbia. This includes all forms of transportation. We then calculated the time spent assuming a two-way trip on five days out of each week, and expanded this up to 10 years. To find the opportunity cost, we multiplied the number of hours by the federal minimum wage ($7.25).

Are you ready to take action?

We are ready to help.